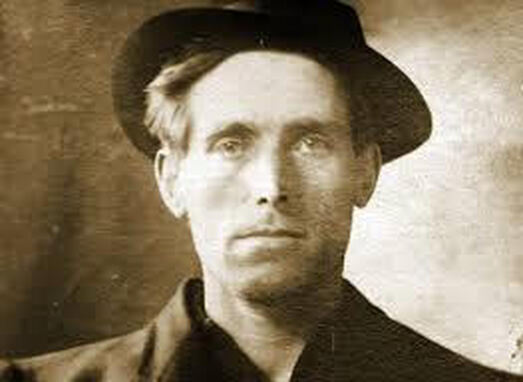 Joe Hill ca. 1915
Dan Furman's "The Joe Hill Revival" tells the story of Joe Hill's brief life, his impact and untimely death.
Dan has composed an inventive, sweeping score with an original libretto while also including some of Joe Hills original (often humorous and biting) lyrics and prose into the musical.
While the traditional fourth wall is used in staging the show; as Joe Hill liked to do in his time, we at times break the fourth wall by encouraging audience participation.  This is especially true midway through the show when the audience moves from observer to participant, singing along with Joe Hill, Elizabeth Gurley Flynn and company to the lyrics of some of Joe Hill's most widely remembered songs.

As Joe Hill said:
"...a pamphlet no matter how good is never read more than once, but a song is repeated over and over again. Put a few cold hard facts in a song and you're bound to reach workers who would never pick up a pamphlet on economic science..."
Thus consciously and unconsciously his words still connect us today. We hear and sing what inspired the working people of Hill's time.

In this telling of Joe Hills story Dan transports the audience through the eyes ofJoe Hill, Elizabeth Gurley Flynn, Hilda Erickson, Otto Appelquist, the judges, lawyers, workers and hobos via a cast of nine who play twenty one characters . He dramatizes the unknown love tryst that becomes Joe’s undoing. Hidden for years this lovers conflict has been revealed to be the catalyst which quite directly led to Joe’s arrest, trial, conviction and execution.

While I believe this is a theatre piece about finding joy—joy in living, in adventure and in love—it’s also about integrity; but mostly it’s about character, commitment and sacrifice, in life and in facing ones death.

Joe Hill became an unlikely hero to the people. He was far from perfect, but he discovered something men and women the world over search for within themselves, a cause larger than themselves.

​He spoke, wrote and lived what he believed... and so for a brief period of time "...He indeed held history in his hands”.
Jerome Harmann Hardeman (Director/Choreographer)


Thoughts from Dan Furman, the author:
"The Joe Hill Revival" brings the story of executed IWW songwriter and union activist Joe Hill into our 21st century through its contemporary musical language and a participatory tavern environment.

Songwriter and activist Joe Hill often rewrote the words of church hymns and popular tunes of his time, converting them into songs of protest and activism.   Extending that approach, this show often resets Hill's lyrics using the musical language of our time.  But although the show's music is an amalgam of hiphop, bluegrass, folk, blues and country, it is held together by the voice of Hill and the ideas he and the IWW represented.  Although Joe Hill was a Swedish immigrant, in this revival he is played by an African-American actor.  The show is narrated by Hill's contemporary, Elizabeth Gurley Flynn, a firebrand activist, a leader of the IWW at the time of Hill's arrest, and the inspiration for Hill's song, "The Rebel Girl."

But "The Joe Hill Revival" is not just a political or historical tale.  It is also a love story.

The story begins as Hill arrives in Salt Lake City and steals his best friend's girlfriend.  This non-political event starts the whole cascade leading to Hill's execution.  Hill was originally arrested because he was shot the same night as a grocer in Salt Lake City was murdered by two men.  Reports were that one of the assailants had been shot in their escape.  Amid lurid stories in the press of radical IWW mobs threatening society, Hill was railroaded to his death in November of 1915, even though a motive was never established and all the evidence was at best circumstantial.  Although Hill claimed he was shot by a friend in a dispute over a woman, up to his dying day, he refused to identify who shot him and never took the stand in his defense.

Because of this, Hill's case itself has long been a bit of a puzzle.  The unidentified woman of Hill's story is now known to be Hilda Erickson, a member of the family with whom Hill and his friend stayed when they arrived in Utah.  As recently as 2011, new evidence in the form of an unsent letter was uncovered by author William Adler ("The Man Who Never Died") that backs up Hill's innocence.  Although she never testified in court, Hilda Erickson visited Hill in prison every Sunday from his violent capture (he was shot by police while he lay in bed) to his final week in November of 1915.

Central to the historical part of the story is the bold activism of the IWW, the International Workers of the World, of which Joe Hill was a member.  The IWW was formed in the early years of the 20th century and their radical approach to unionism was welcomed by many workers.  They did not recognize all the divisions within industries and attempted to organize all workers into "One Big Union."  They rejected the exclusion of Blacks, Chinese and other nationalities from labor unions and sought to organize women workers as equals.  They refused to sign contracts with employers, preferring verbal agreements that preserved their right to strike, and allowed unemployed workers to join.  This was especially important in the American West of the early 1900s, where Eastern corporations operated huge labor intensive mining and logging industries with no obligations to the health, safety or quality of life of their workforce.

The Joe Hill "Revival" brings these struggles back to life and points to connections with today's struggles--from the protests against the police murder of George Floyd to the battles by Amazon workers and others to assert their rights against the interests of the rich.  The Joe Hill Revival follows Hill as he endured 22 months on death row--eventually coming to the conclusion that he was worth more to the cause of the IWW dead than alive, despite protests to the contrary of those around him.  The show's conclusion celebrates finding light in the fight to change the world.
​
​